Sometimes, you just know what you want to be when you grow up. Dr. Paul Meredith, M.D. is no exception. “I was always interested in medicine and never considered another field,” he said, and he’s been working in medicine for almost 40 years now.

Dr. Meredith earned his M.D. at the University of Arkansas and did his medical residency at Arkansas Children’s Hospital. He practiced as a pediatric physician for 10 years before switching to work in emergency medicine. “After working in emergency rooms for 20 years, I decided that there had to be a better way to practice medicine.” That’s when he met Dr. Tim Reynolds and learned about HealthCARE Express. He was hooked. “The company's desire to provide not only excellent working conditions but also their concern about one's life outside of medicine influenced me.”

At HealthCARE Express, Dr. Meredith was given the position of Medical Director over all of the urgent care clinics. He’s been working here for six years now, and he says he’s been loving every minute of it. Seeing patients and teaching the providers is his favorite part of the job. “Being a resource for the providers to help them take care of our patients is so satisfying,” he said.

Outside of work, Dr. Meredith likes to travel with his wife, Sarah, and to be with his sons and grandchildren.  He enjoys playing golf, but he says it’s “not the obsession” that it has been for him before. He also spends a lot of his time reading, especially mystery stories or anything about Winston Churchill and Word War II. 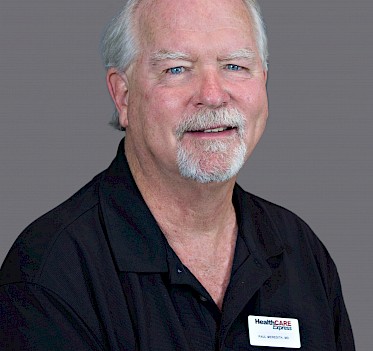