Why You Shouldn't Vape

Why Vaping Is Bad For Your Health

If you haven’t heard of vaping or electronic cigarettes, aka e-cigarettes, their popularity is growing. This is especially true within our teenage population. There are lots of claims out there that vaping is safer than smoking traditional cigarettes while there are also claims that vaping actually does more damage to the body than cigarettes. So what are we supposed to believe? We at HealthCARE Express did some research of our own and here are some of the things we discovered.

4 Reasons Why Vaping Is Bad For Your Health

Yes, e-cigarettes contain nicotine. The same nicotine that is found in regular cigarettes. In fact, it is the main ingredient. Nicotine is extremely addictive, even more so than opiates, methamphetamine, sugar, or alcohol. A person will experience the same “cravings” for e-cigarettes that a person experiences for regular cigarettes which is the addiction part of nicotine. Nicotine also does damage to almost every part of the body including the brain, heart, liver, kidneys, and lungs. Make no mistake, nicotine is a poison, and at one point was used as a home pesticide. We highly recommend you not ingest nicotine in any form.

Toxic Chemicals Are Inhaled Through Vaping

One of the rumors we heard was that vaping reduces the amount of total chemicals entering the body. Technically, this is true. A regular cigarette contains over 7,000 chemicals that become ingested into a person's body. An analysis of e-cigarettes showed that there were a little over 2,000 chemicals in vape juice. So yes, there are fewer chemicals ingested while vaping but a lot of those chemicals are still toxic. There have been trace amounts of heavy metals found in vape juice which can cause a variety of cancers in the body as well as chemicals that are commonly found in antifreeze, floor epoxy, and other chemicals which have been scientifically deemed as carcinogens. If the nicotine doesn’t get you, the other chemicals will.

A Developing Brain Is Impacted By Vaping

There is a reason why the use of legal & illegal drugs, as well as alcohol, are cautioned against minor children. It is because their brains and bodies are still developing and these substances can alter normal development. Vaping nicotine or marijuana is no different. This is because the brain is developing the addiction synapses in the brain early on so the brain becomes even more reliant on keeping these synapses firing. A developing teen can actually become more addicted to nicotine than a person who started using nicotine in their 30’s. And because nicotine damages the prefrontal cortex section of the brain, this can affect a young person’s abilities of decision making, judgment, & planning as well as affect their abilities to properly manage both outgoing and incoming attention. Our children already have it hard enough without them having both addiction and mental health issues.

Vaping Can Cause Lung Injury

When a person is vaping, they are putting something into their lungs that normally wouldn’t be there. This will cause the lungs to have a reaction. Similar to smoking too much, a person who vapes too much can cause damage to their lungs by having too much “vape” in their lungs which causes the lungs to over-expand. Just last year, 60 people died from vaping and hundreds more had to be hospitalized. This number has increased every year since electronic cigarettes were introduced.

Vaping Is Increasing In Children

There is a lot of misinformation out there about vaping which is causing more children to explore vaping. Besides the misconception that vaping is safe, the vape juice is usually flavored with candy-like flavors. These flavors make it even more “fun” for kids to use. Plus, vape pens are small and sometimes do not even look like a cigarette. This makes it easier for children to conceal and to use in public places like school bathrooms, hallways, or even at a friend’s house. Kids want to be like adults and if they see that vaping is “cool,” they are going to want to be cool too.

Even though e-cigarettes have less chemicals than cigarettes, they still have nicotine. This one substance alone has caused a lot of damage to the human race. Over the last 50 years, many efforts have been made to reduce the usage of nicotine and prevent future generations from getting addicted to it. The true long term effects of vaping are still unknown as vaping has really only been around for about 20 years. What we do know is that it has nicotine and nicotine causes damage to every organ in the body while making a person want more. In this aspect alone, vaping is no safer than smoking.

HealthCARE Express Cares For Your Health

At HealthCARE Express, we are committed to improving your overall health. Although our urgent care clinics cannot directly help you with quitting nicotine, we can provide some help you can take on your own. Sites like smokefree.gov and teen.smokefree.gov can provide a lot of advice and tactics to help you quit a nicotine addiction. You can also call 1-800-QUIT-NOW (1-800-784-8669) to access a phone program provided by the National Cancer Institute to help you or your loved ones quit. It can be tough to quit nicotine but in the end, you will be much healthier & happier you did. 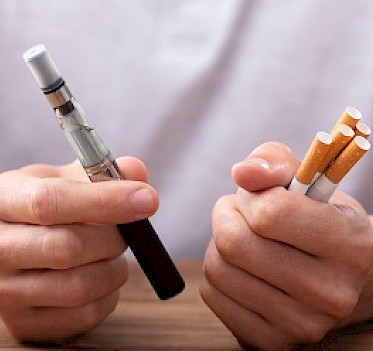