We Know About DWIs, but Have You...

We Know About DWIs, but Have You Heard About DWD?

If water isn’t a part of your daily routine, then you could be making a potentially life-threatening mistake. Driving while dehydrated (DWD) has the same effect as driving while intoxicated, as far as how many hazardous mistakes are made behind the wheel. Dehydration causes reduced concentration, slowed reaction times, and impaired memory recall—all things most people associate with driving while intoxicated or under the influence. Now, studies are showing these are also signs of mild to severe dehydration.

According to a study by Loughborough University in the U.K that involved a group of men with mild dehydration taking part in a driving simulation, driving while dehydrated is equal to having a .08 blood alcohol concentration. "Mild dehydration has been shown to reduce concentration, slow reaction times, impair memory recall, and produce negative effects on mood," stated lead study author Phil Watson, PhD. "All of these factors can impact our ability to safely drive a motor vehicle." To prepare for the study, the men were allowed 85 ounces of liquid the day before the test and only 16 ounces of water the day of the test. "We wanted to simulate real-world conditions, such as when you've had a particularly busy day and were unable to take breaks for drinks,” stated Watson.

The findings were outstanding! The focus group recorded twice as many mistakes when dehydrated as when hydrated. The drastic increase in indiscretions matched driving accidents Watson noted from previous studies where subjects used the same simulator after consuming 2.5 ounces of vodka.

Another study published by Physiology and Behavior supports this as well. On the first day of the study, participants were given 1 cup of water every hour and 47 driving mistakes were recorded. The next day, they were only allowed to take sips of water every hour and the mishaps drastically increased from 47 to 101! Both studies reported lane drifting, late braking, and crossing the rumble strip or lane lines as the top mistakes made by their drivers.

If you are like me, you are probably wondering why and how dehydration has this intoxicating effect on us. Dr. Ron Maughan, the lead researcher for the Physiology and Behavior study, stated our brains don’t function at their best when we’re mildly or severely dehydrated. Dehydration can also negatively affect many important skills needed for to focus while driving such as mental clarity, focus, concentration, our mood, and muscle reaction time.

So, tomorrow morning, instead of lying in bed aimlessly scrolling through our favorite social media sites, sharing, pinning, and retweeting all our weekend DIY projects or recipes, let’s take the first step in getting our city healthy! Let’s agree to drink a cup of water in the morning, a cup before lunch, a cup before dinner, and a cup before bed to get us on the road to hydration!

Want to know how to avoid DWD? Subscribe and look out for our upcoming blogs that will go over hydration tips! 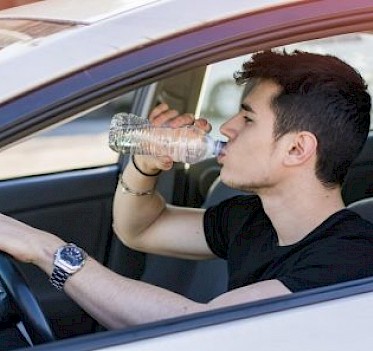