The "Tea" on Fresh Breath

The "Tea" on Fresh Breath

Okay, so this isn’t EXACTLY how the Arthur Wing Pinero quote goes, but it’s true! Tea can freshen your breath.

In 2003, a group of scientists from the University of Illinois in Chicago presented their findings to the American Society of Microbiology about how the compounds in tea can stop the bacterial growth that causes halitosis. Just one cup of black tea has the amazing ability to suppress odors and stop the growth of the bacteria that cause bad breath! Tea, specifically black tea, keeps your breath smelling fresh because it has a high number of polyphenols, powerful antioxidants that prevent plaque from adhering to our teeth.

So, what are polyphenols? They’re antioxidants that work by eliminating free radicals (uncharged molecules) in the body, which are known to cause several health problems. Flavonoids are a group of polyphenols that are produced naturally in tea. Some researchers believe a high amount of these polyphenols in the body can fight viruses, as well as different types of cancers in the pancreas, colon, bladder, prostate, and breast.

Here’s a great natural black tea recipe we think you and your family will enjoy this fall!

Alternatively, you can use dried pomegranate arils and dried rosemary to mix this recipe as a dry tea blend.

So, the next time you aren’t sure if you are minty fresh or not, grab a cup of tea instead of coffee and enter that meeting or interview with confidence! 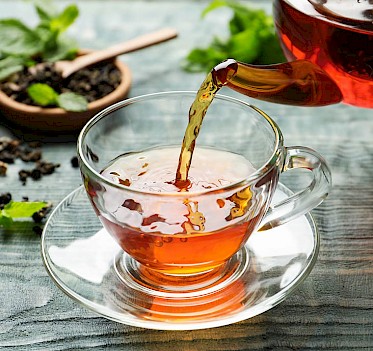