Take a Shot! A Tetanus Shot, That Is!

You’re out digging in your garden and get a cut on your hand. A little dirt gets in the wound, but you don’t think anything of it. It’s just a little dirt, what harm can it do? Didn’t grandpa say to go rub some dirt on a wound when you hurt yourself as a kid? It should be good for the wound, then, right? Wrong! Do you want tetanus? Because that’s how you get tetanus… Sorry.

"Tetanus bacteria (clostridium tetani) is mostly found in soil. A common misconception the public has about tetanus is that you get it by stepping on a rusty nail. Sure, you might get tetanus from a rusty nail, but it's because that rusty nail was dirty or exposed to the bacteria in soil, not the rust itself," our Director of Nursing, Stacy Lambert, explained. According to the CDC, tetanus spores exist everywhere in the environment. It’s generally harmless until it gets into the body where it develops into a dangerous bacterium.

Stepping on a rusty nail, while the most common injury associated with tetanus, isn’t the only way you can get the bacteria into your system. "People think you get tetanus from a big, traumatic injury with blood spurting everywhere, and this isn't always the case,” Stacy explained, “In fact, a lot of times people can become infected by just a small cut." In fact, small puncture wounds, old wounds on the skin, and even burns can become infected with tetanus.

How long will it take for you to realize you’ve contracted tetanus. "The incubation period is 3 to 21 days, which is kind of a surprisingly long incubation period," Stacy said. The first signs of tetanus infection is the symptom tetanus is most commonly associated with: jaw cramping. It also causes muscle spasms (most often in the abdominal area), muscle stiffness, trouble swallowing, headache, fever, and even seizures.

Diagnosing a tetanus infection can be difficult as lab tests aren’t really helpful. Even more frightening, there’s no cure for tetanus. The only way to prevent contracting the infection is to get the tetanus vaccine. You need to keep your wounds cleaned if you injure yourself, but even then you can’t be sure.

If you’re afraid your wound may have gotten infected with tetanus bacteria, come to HealthCARE Express for it to be treated. We provide tetanus shots at all our clinics. Though we don’t require appointments at HealthCARE Express, we do recommend you call ahead to make sure we have them available.  How often should you get the shot? Is it a one-and-done deal, or do you have to get it renewed every year like a flu shot? "I always suggest people get their Tetanus Vaccine (Tdap) every 10 years and keep it up to date, especially people who work in occupations like farming, firefighting, and construction,  have hobbies like camping or fishing, or people like me who like to garden and ride 4-wheelers and are super clumsy and accident prone,” Stacy advised, “It's just a really good idea to make sure you're always covered, just in case." 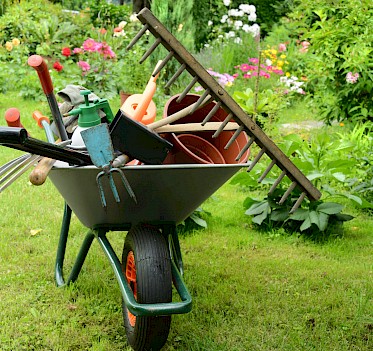