Rockstar of the Week: Jerry Brow...

Rockstar of the Week: Jerry Browning

You know what they say, “All work and no play makes Jack a dull boy!” We have a similar belief here at HealthCARE Express. We want our team to have to stop and wonder if they are working or if they are playing. Jerry Browning, a mid-level provider here at HCE, understands that concept better than most! Browning has been with us for 12 years, and he is still loving every minute of his job. He loves seeing any, and all, of the patients that come to visit the clinic, finding it fun trying to find out what may be wrong with them.

Jerry Browning completed his undergrad years of school at Texas A&M and the University of North Dakota. He then went on to get his graduate degree and the University of Nebraska. Not all of this happened back to back, of course. It took Browning doing a few different jobs before he figured out what he had the most fun doing! He first became interested in medicine after he went to work with the fire department. Instead of putting out fires, he was assigned to work the ambulance. Soon after experiencing it and having so much fun doing it, Browning went on to become a paramedic. “I would work in the ER as a paramedic on my days off at the fire department,” he explained, “And that made it even more fun!”

Browning then went on to nursing school and became an R.N. “I had a lot of fun as an R.N., but there came a time when I felt I needed to do more in life,” he said. So, he began on the path to what he now claims as his proudest achievement: becoming a physician assistant (P.A.). Applying to one school is hard enough, but Browning was determined to follow his dreams. So, he applied to over 30 different P.A. schools, telling himself he would take the first offer. After a period of waiting and having no letter of acceptance, he applied again and finally was able to continue bettering his career! After some time, he finally came to join us here at HCE.

In his free time, Jerry Browning loves to fly. He has two planes of his own, a Cessna 172 and a Fisher 404. He loves the thrill of flying, and he is even working on a helicopter flying license!  “All of this for fun,” he said. 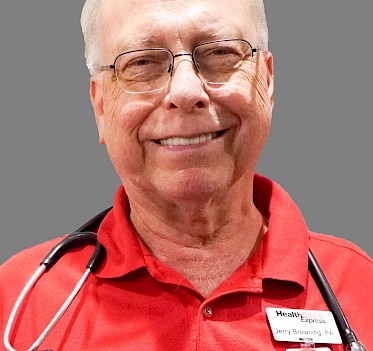