It's Snot What You Think!

It's Snot What You Think!

One of the most underappreciated functions of the body is mucus production. Yes, it’s pretty nasty, but mucus helps keep your sensitive nasal cavities flushed out of foreign— and possibly harmful—  materials. It also keeps your nose from drying out while you’re breathing which saves you from some aches and pains.

Mucus is mostly composed of water, but it contains helpful things like proteins and antibodies. These antibodies are part of the front line of your body’s defense against disease. While a runny nose is often a symptom of being sick, it’s actually your body trying to help fight off the bacteria or virus and not the virus causing it. Though some viruses can cause the lining of the sinuses, which produce mucus, to become inflamed which causes an overproduction, and leads to pressure building up in the head and sinus pain. Another of your mucus’ benefits is how it can help you determine how your body is feeling based off what color it is. Gross, I know, but hear me out.

A lot of us have this notion of mucus normally being yellow or green since we grew up seeing it portrayed in movies or cartoons that way. Natural, healthy mucus isn’t green or yellow at all— it’s clear. Yellow or green mucus are signs your body is trying to fight off infection.

The normally clear mucus turns a yellowish color when your body is in the beginning stages of fighting an infection. Many of your white blood cells die trying to fight off viruses and bacteria that invades your body. Depending on how many dead white blood cells are in your mucus, it may take on a different color. When an infection first starts in your body, your mucus will turn a yellowish color. It starts to become a little more worrisome when the yellow turns to green. Green means your infection is progressing and the white blood cells are having a harder time fighting it.

But don’t always trust your mucus to tell you when you’re sick! If you have allergies, your mucus will often change colors if it comes in contact with an allergen. Your body reacts to allergens much the same way as it does to bacteria and viruses. Your body views allergens as harmful substances, so it does all it can to get them out.

If you think you may be sick, head on over to HealthCARE Express, and we will see to it you start feeling better.

Stay healthy out there, 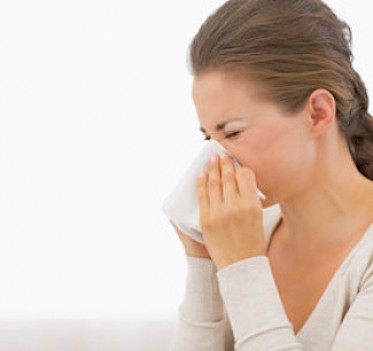