How Much is too Much?

Over the Counter Medicine for Children

Even though many of them act like it, kids aren’t mini adults. Many over the counter medicines grown-ups can take— even ones you may have thought were safe— aren’t good for children! We spoke with Dr. Paul Meredith M.D., the Chief Medical Officer of HealthCARE Express, for the whats-what when it comes to medicating your sick kiddos. Before working for HealthCARE Express, Dr. Meredith was a pediatrician and he maintains his board certification in pediatric medicine, so if anyone knows about medicine safe for children it’s him!

Let’s start with the basics. According to Dr. Meredith, over the counter (OTC) drugs should not be given to children under the age of two unless prescribed by a physician. In the case of cough and cold medications, he recommends it not be given to children under six. “A cough is the body’s way of getting out the gunk that is making a person sick,” he said, “Let the cough do its job. Unless the child is unable to sleep or get any rest.” If that is the case, Dr. Meredith suggests using an OTC cough or cold medicine at night only. While Dr. Meredith does suggest using a mixture of honey and warm water to soothe a child’s sore throat, he also warns children under one should not be given honey it often contains small traces of botulism which can cause gastrointestinal issues and death in infants. If your child is coughing up yellow or green mucus, that is a sign of infection and you should take them to see your healthcare provider or bring them to HealthCARE Express.

Never give a child a medication intended for adults. Some adult OTC medications have entirely different ingredients and different ratios of ingredients, and it’s an impossibility to figure out how much you can give to a child. Also, you cannot interchange OTC infant drop dosage with children's liquid medicine. Infant drops are much more potent than children's liquid medication. Acetaminophen (Tylenol) maybe used under 6 months after consulting a doctor. Ibuprofen, on the other hand, may be used in children over 6 months after consulting a doctor.

If your child has a stuffy nose, be wary of using nasal sprays containing zinc. “Zinc is a big no-no,” Dr. Meredith informed us, “When given to children as a nasal spray it can ruin their sense of smell.” Saline nose spray, on the other hand, is safe to use. Another “no-no” in OTC drugs is aspirin. “Some people think baby aspirin must be for kids, but it isn’t,” Dr. Meredith warned. Do not give aspirin to children under 18 ever. Period.

We know how hard it can be to get your child to take medicine, but it is important to make sure they know it’s medicine. Do not tell children their medications or vitamins are candy. This increases their interest in the contents of medicine bottles and prescription bottles and they may start to think all medications are candy.

Dr. Meredith also says not to give two OTC medications to children at the same time without really checking the ingredients. Oftentimes, two different medications may have the same ingredients and may cause an overdose. For instance, some cough and cold medications contain acetaminophen and some do not, but if the medicine you are giving your child does contain it and you are also giving them Tylenol that would be a double dose of acetaminophen.

And always, always use recommended dosage. Just because you think your child is really super sick doesn’t mean to increase the dosage. When measuring out dosages of medicine for your child, don't use regular dinner silverware. Always use a measured utensil, cup, or syringe to give medications. Conveniently, many OTC medicines come with labeled measuring cups so you can properly dole out a dosage, and they are all uniform in measurements. Your dinnerware spoons all come in different shapes and sizes, though, and none are able to appropriately measure in millimeters. Dr. Meredith suggests you read the label on your child’s OTC medicine three times: before you measure the medication, after you measure the medication, and before you put it in the kid’s mouth. "Most overdoses in children are due to parents accidentally misreading, or failing to read the label," he warned.

Like the food in your cabinets and refrigerator, medicines can expire. Always pay close attention to the dates on medicine before you go to give it to your child or take it yourself. Always toss expired medications. Many times people think medicine loses potency after expiration but it doesn’t always, and this often leads to accidental overdose. "You just can't know the strength of the medication past the expiration date," Dr. Meredith said, “So you should always throw it away instead of risking it.” Medications that have not been stored properly should also be thrown out even if they haven’t reached the expiration date. For instance, a liquid medicine that has not been properly sealed will likely have the alcohol evaporate, causing the medication to be more potent and lead to accidental overdose.

You should take your child to see their doctor or bring them to HCE if you have been using an OTC medicine for more than three to five days. Please, be sure to take your child to the doctor if they have a fever over 102°F, have a fever under 102°F that has lasted more than three days, have difficulty breathing, or have been vomiting or have had diarrhea for over 48 hours. If they have been vomiting or have had diarrhea, be sure they have been drinking only clear liquids before you bring them to see the doctor. If not, please let the doctor or provider know. "Always be sure to tell your doctor all of the medications your child has been taking - not just prescription drugs,” Dr. Meredith said, “Your doctor needs to know what OTC medications your child has been taking, as well, to ensure there are no adverse reactions between anything they might prescribe and what the child has been taking."

Parents are around their child more than anyone else. If the child is not acting normally and you can’t figure out why, then it’s totally fine to go see a doctor. Never be afraid to consult your provider if you think something is off, or if your child is not behaving normally. “When a child comes in with a 102°F fever, I know what to do-what to check. I’m actually more concerned when I see a child come in with concerned parents who are unsure about what is wrong but just know something is off,” Dr. Meredith stated, “Never be afraid to advocate for your child because, most of the time, you’re right. 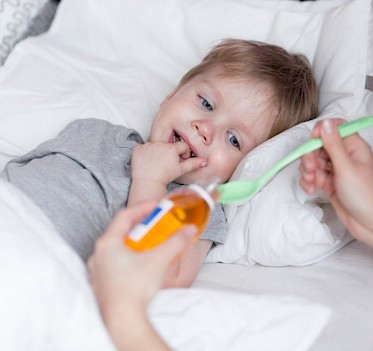