Do you ever watch a movie set back in the medieval or Victorian era and think, “Man, I wish I lived back then!”? Well, things weren’t nearly as pleasant as the movies make them seem, especially the medical practices. We’ve come a long way in the medical field since then, and luckily many of the procedures and medical beliefs of the time fell out of practice. Thankfully, when we visit the doctor now they prescribe you something that will make you feel better instead of doing procedures like drilling holes in your skull or draining you of some of your blood in attempt to cure what ails you. Let’s check out a few of these strange archaic medical practices that have fallen out of style.

Back in the day, people believed that there were four bodily humors in the human body that were embodiments of the elements of fire, earth, air, and water that governed how a person’s personality and health were. This idea was formulated back in the time of ancient Greece, but remained in practice until the Renaissance. These humors were blood, yellow bile, black bile, and phlegm, often referred to as the Sanguine, Choleric, Melancholic, and Phlegmatic humors respectively. Each of these bodily fluids were attributed to different aspects of a person’s personality.

Are you introspective and quiet? Then your body produces a lot of black bile.

Are you optimistic and happy? Then you are abundant in blood.

Are you tired and sensitive? Sounds like you may have a lot of phlegm in you.

Are you passionate yet irritable? Looks like you’re body’s making too much yellow bile.

A balance of the humors was considered ideal, but when one got out of balance… that’s when you started getting into some trouble. These archaic doctors had many different ways of cleansing a body of excess humors. Too sanguine? Then it’s time for a bloodletting. Too melancholic? Then the doctor will help you purge yourself of some of that black bile, either through vomiting or defecating. Either way, having an excess of humors was no fun.

We mentioned bloodletting just above this section, but what exactly was bloodletting and what was it for? Well, bloodletting is the practice of removing blood from a person in order to help treat a sickness or disorder they have. There are two types of bloodletting that were common practice, from the medieval times and even into the 19th century:  leeches and venesection. So, they either placed wriggling blood hungry vermin on your body, or they sliced open a vein in your arm.

Either way, no thanks!

Bloodletting was used to “cure” many different ailments from a fever to seizures. It was a versatile treatment and was effective in some cases. It may be even making a resurgence in treatments of obese people with metabolic syndrome.

This is one of the oldest medical procedures, dating back as far as the Stone Age! But what is it, exactly? Trepanning simply involves boring a hole into one’s skull using either a drill or a scalpel.

Skulls have been found all around the world with evidence of trepanning, but there isn’t any definitive answers as to why. Some think it was a way to remove fractured bits of skull out of an injured person’s head, and still others think it was a way of relieving pressure in the brain to alleviate migraines or seizures. There are a few anthropologists who even believe that trepanning was ritualistic.

Surprisingly, many people who had a trepanning procedure done survived. Evidence of healing in skulls found with these surgical holes shows that despite how lethal this type of surgery could be, even ancient peoples were able to perform it well.

Like bloodletting, there are a few scientists and doctors that want to bring back trepanning, though for quite a strange reason. One Dr. Bart Hughes believes that trepanning can be used to help humans achieve a higher level of consciousness by “unsealing” your brain to make it more open to experiences around it.

Urine as an Antiseptic

There was a practice in medieval times where urine, human or animal, was used as a disinfectant for wounds. It was mostly used for battle wounds, which was probably a safer alternative than water at the time. Water in medieval times was hardly drinkable, so pouring it on an open wound would probably cause an infection. It used to be believed that urine was sterile, so it was safe to use on a wound. While urine isn’t sterile, it usually has a low amount of bacteria in it (if the one who produced it doesn’t have an infection, that is). ‘

Some medieval doctors even attempted to use urine as a way to try to treat the plague, which obviously didn’t work… Luckily, we have actual antiseptics now, as well as better ways to treat disease rather than ingesting or covering yourself in pee.

You’ve been up all night coughing, and the next day you go to visit your doctor. After informing him of how you feel and everything that you believe is wrong with you, he ponders for a moment and pulls out several charts. These charts depict the position of the moon and planets. He asks your zodiac sign. You tell him and he makes a distressed noise as he peers down at the charts. After comparing your zodiac sign to the position of the celestial bodies he determines that you are simply suffering from a kidney infection that he predicts will last a few more days. He gives you something the chart says will help you and sends you on your way. You go, but you’re quite sure there is nothing wrong with your kidneys…

That is basically how medical astrology works. Astrology was a deeply integral part in ancient and classical society, helping them know when to grow crops to when to head out out to sea. So, of course, it had its place in medicine, too. Deeply complex star charts were kept to determine what ailment a person suffered from. Depending on your zodiac sign, you were more susceptible to ailments in different areas of the body. The position of the stars and planets also affected what parts of the body were affected. The treatment you were given for your ailment was also based on the position of the planets.

Aren’t you glad you can just go to the doctor now and they can listen to your symptoms and give you a check up to find out what’s wrong?

In the 1800’s it became common for those suffering from a psychological disorder to be prescribes a “rest cure.” This treatment was most commonly used on women who suffered from depression, anxiety, and other mental disorders.

So, what did the rest cure involve?

A woman going through a rest cure treatment was forced to stay isolated in a room away from friends or family from 6 to 8 weeks! She was usually confined to her bed and wasn’t allowed to take care of herself. That was left up to nurses that would visit her, feed her, massage her, and bathe her. She was usually not allowed to speak with them. This woman’s diet would usually consist of milk, bread, and high calorie foods. She would also normally receive electric shock therapy to stimulate her muscles to keep them from atrophying.

While this treatment was intended to aid women suffering from mental disorders, it often caused them to decline more.

That’s right. This highly toxic metal was used in several different medical treatments in both an ingestible and topical form. It was most commonly used in the treatment of leprosy and venereal diseases, such as syphilis. These mercury infused treatments rarely helped those that took them, and often made them even sicker by causing organs to fail.

Ancient doctors and scientists believed that brews of mercury, sulfur, and arsenic could prolong the human life. We know now, though, that a mixture like that is a really, really bad idea.

This procedure originated in the early 1900s and was performed until around the 1950s. Pretty recent in the grand scheme of things, don’t you think? This is one of the most horrifying practices on the list, though. The idea of a lobotomy was normally well-intentioned. It was intended to stop a person’s mental disorder so that they wouldn’t have to spend their lives in an asylum.

The procedure involved the surgeon either drilling holes in the patient’s skull to access the frontal lobe, or accessing it through the eyes. Two simple tools were used to then disconnect the frontal lobe. This left the patient docile and nearly unresponsive afterwards. Why?  Well, the frontal lobe is responsible for a person’s personality, language function, and problem solving. It is basically the control panel for the human body, so disconnecting it wasn’t exactly the best idea.

Mothers have always had trouble soothing crying babies, but in the 1800s a product circulated that was intended to aid them. It was called a soothing syrup and was intended to be administered to crying infants that kept their parents up at night. A teaspoon of the syrup was to be given to the restless baby, and soon they would be fast asleep. Or dead.

What was in this syrup that made it so deadly and soothing? Well, it contained a mixture of morphine, alcohol, and a compound similar to heroin. That mixture is sure to knock out even a full-grown man, if not a horse... 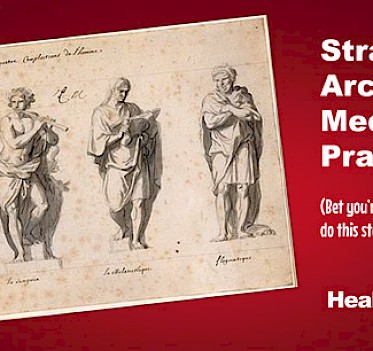